Much has been written about the demise of the CF-105 Avro Arrow – high cost, government incompetence, American interference.  Or was it something more mundane?  The introduction of the 1.5 kiloton Genie nuclear missile and surface-to-air missiles were the most likely culprits.

With a kill box the size of three football fields the Genie negated the need for an accurate high-speed interceptor.   The Nike-Hercules surface-to-air missile had a 40-kiloton warhead twice as powerful as the bomb dropped on Hiroshima! To penetrate North American air space, Soviet bombers would have to fly through a maelstrom of nuclear air-to-air missiles and surface-to-air missiles.   The Avro Arrow with its great speed, range, and air-to-air missiles would have made an outstanding interceptor.  Unfortunately, the miniaturization of nuclear warheads altered the air defence equation permanently.

The other, not often, asked question is, how many Soviet warheads were assigned to Canadian targets?  The answer has to be few if any.  Canada did not have offensive nuclear weapons and the first priority of Soviet forces was to destroy America’s nuclear arsenal in a first strike.  Canadian air space was the first line of defence for America and not Canada.  An expensive interceptor like the Arrow was, in many ways, an extravagance.  And one a small country like Canada could not afford. 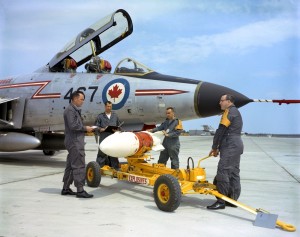 RCAF CF-101 Voodoos armed with Genies backed up by Bomarc nuclear air-to-surface missile gave the RCAF a powerful interceptor force at a relatively low cost.  Even if the Arrow had been introduced it would most certainly have been modified to carry the Genie missile.   Why use a sniper rifle when a shot-gun will do?