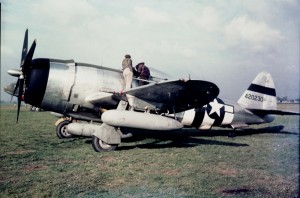 Credit for the first Messerschmitt Me 262 jet fighter to be ‘brought down’ in combat belongs to Joseph Myers and Manford Crory of the P-47D-equipped 78th Fighter Group, who manoeuvred a 1./KG 51 machine into the ground on August 28, 1944. The German pilot survived.  No shots were fired by both sides.  It happened again on October 2nd when P-47D pilot Lt Valmore Beaudrault of the 365th FG caught an Me 262 out of fuel at low level, forcing it to crash land.  Astonishingly, the pilot of the jet on both occasions was Oberfeldwebel Hieronymous Lauer who survived both encounters.

Credit for the first Me 262 shot down by gunfire, however, belongs to five pilots from No 401 Squadron RCAF on October 5th.   Flying a high patrol over the Arnhem-Nijmegen area the twelve Spitfires from 401 Sq soon spotted a Me 262 diving toward Nijmegen at 1445hrs.   The Me 262 did show some fight and returned fire on several occasions with little result.  The Me 262 was hit by five individual pilots causing it to burn in the air and crash in friendly territory.

Does maneuvering an aircraft into the ground require more skill than aerial gunnery and should it be considered an air-to-air victory? Or was it the skill of the German pilot who survived the two encounters by skillfully crashing landing his Me 262 the major reason for the P-47 victories? Is machine gunfire a prerequisite for a true air-to-air kill?