Celebrating the 80th Anniversary year of the formation of RAF Fighter Command, the Imperial War Museum’s Meet the Fighter Air Show showcased a wonderful selection of Royal Air Force fighters from World War I to the present.  Saturday was a washout due to rain, but Sunday’s blue skies provided the perfect backdrop.

Moving back to the World War II piston era a pair of Spanish built Hispano Buchons from Spitfire Ltd and Historic Flying Limited flew a spirited aerobatic display.  This was followed by two Spitfire Mk Ias from Comache Fighters and Historic Flying chasing a single Buchon to honor those who flew over Dunkirk.

Inter-war fighters were extremely well represented at Meet the Fighters.  The Fighter Collection’s Gloster Gladiator Mk I and Hawker Nimrod Mk I was joined by the Historic Aircraft Collection’s Hawker Fury Mk I and H. Davies’ Hawker Demon.

World War I was again center stage as the WWI Aviation Heritage Trust’s Sopwith Snipe was joined by the Shuttleworth’s Bristol F2B.  Shuttleworth’s example was built in 1918 and was the only original World War I aircraft at the show.

To honor RAF Training Command’s wartime and post war contribution a North American Harvard IV and two de Havilland DHC-1s graced the stage.  Working as a tight pair the two Chipmunks performed loops and rolls as the Harvard did the same, all in the same airspace.

The Battle of Britain Memorial Flight’s Avro Lancaster B1 injected a dose of heavy metal with its four Merlins singing a well-known tune to the Duxford crowd.

The Fighter Collection’s FG-1D is a mainstay at Duxford. Originally paired with the M. Davy’s Yak-3, it unfortunately had to bow out shortly after take-off due to an engine problem giving the Corsair a solo stage.

One of the more unusual displays of the day was the fighter gunnery training presentation.  A Piper Cub towing a drogue and the Historic Aircraft Collection’s Hurricane Mk XII made several gunnery passes from different angles and heights.

Representing the early Cold War era three jets from the Norwegian Air Force Historical Squadron added the first jet noise of the day.  First off was the Mikoyan-Gurevich MiG-15UTI followed by the paired take off of a de Havilland Vampire VB52 and T55.  The MiG provided a solo routine followed by the two Vampires in a two ship aerobatic display.

Representing the rescue of many downed airmen during World War II Plane Sailing’s PBY Catalina put on a vigorous display.  With its huge wing the PBY proved remarkably maneuverable.

The B-17 Sally B is a crowd favorite at Duxford and gave its well-known display.  Early US 8th Force bomber missions in 1942 were often escorted by Spitfires of RAF Fighter Command.

The highlight of the show was the glorious massed formation of fourteen Spitfires.  Duxford is the only place in the world where you can witness this type of historic formation. Not only is fourteen Spitfires in formation an amazing sight, but also within that formation was the complete history of Britain’s most iconic fighter.  Four Mk Ias, three Mk Vs, two Mk IX, two Mk IXTs, one Mk XVI, one Seafire LF III followed by a single Griffon engine Mk XVIII. After several passes the formation broke up into three distinct acts. While six Spits provided a lovely figure 8 tail chase in back from the flight line, two separate flights of three Spits each roared across the center line with each flight coming in from opposite directions, many times simultaneously!  Low and fast it was a wonderful display of airmanship and flying prowess you can only find at Duxford.

And if that wasn’t enough the final act was the world famous Red Arrows. 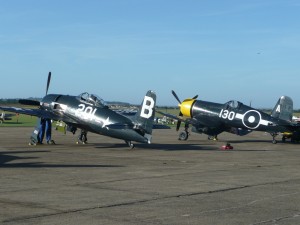 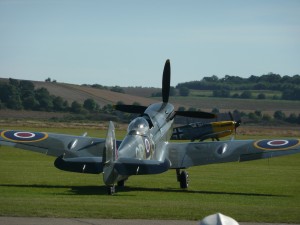 This was a fitting end to the Imperial War Museum’s flying season.  The variety of fighter aircraft from so many eras was truly amazing and is unique to the famed Duxford airfield.