Getting a good photo of a cockpit is a challenge for most photographers, but not for Dan Patterson, the best in his field at this demanding work. Donald Nijboer’s excellent text, amplified by meaningful quotes, makes this a book to buy for the home library, and perhaps more important, as a gift for someone you’re trying to interest in aviation. It effectively reduces an airplane from an intimi­dating mass of machinery to an inner world, where the reader is in charge of vital matters such as airspeed, altitude and attitude. While those first two parameters—air-speed and altitude—are always well defined, attitude has a double meaning here. It indicates not only the choice of the level and the airspeed at which you fly, but also the effectiveness with which you fly them. This book shows how, over time, the growing complex- ity of flight was matched by an increase in equipment and instrumentation. Nijboer reveals how important each instrument is, even though you may never see it in action, as with the red emergency fire light. (I’m reminded of my first takeoff in a Boeing B-47 at McConnell AFB, where the instructor said, “Don’t worry about getting a red fire warning light.” What he should have said was, “Don’t worry about getting six red fire warning lights all at once,” for that is what showed on the dials.)

Fighting Cockpits is a great book on an often-overlooked subject, taking you all the way from the primitive driver’s seats of World War I aircraft to a modern­day “fifth­generation” fighter. The narrative explores questions ranging from “how many of these instruments saved lives” to “how many of these instruments were ever actually used.” Nijboer also makes very clear that the path to progress in aviation was sometimes led, and sometimes followed, by instrument development. 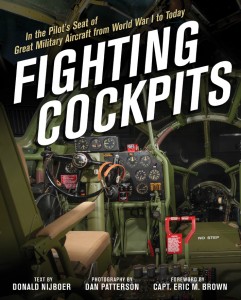 former director of the National Air and Space Museum