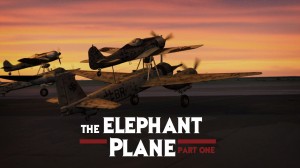 April 1st 1945. Germany is on the brink of utter defeat. To gain time and prepare their defenses the Germans needed to slow the Soviet advance. The bridges over the Vistula and Oder had to be destroyed. The question was, how? The new Mistel composite aircraft was not one of Hitler’s so called “wonder weapons”. Using surplus Ju 88s packed with 1700 kilograms of explosive and a fighter on top, the Mistel was the world’s first piggyback bomber.

As the Allies converged on Berlin, the Luftwaffe’s last heavy bombing attacks of the war were launched. Braving a wall of flak and Russian fighters, individual Mistels pressed home their last desperate attacks.  See it now at aerocinema.com