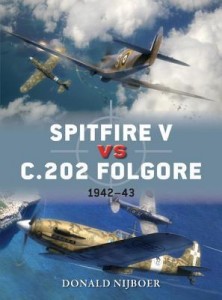 My newest book, Spitfire V vs. C.202 Folgore, will be available in April/2013.  The cover artwork created by Gareth Hector is now complete.  The combat scenes are described below.

Future ranking Malta ace Sgt George Beurling claimed his fifth and six victories in defence of the beleaguered island on 10 July 1942 when he destroyed a Bf 109 and C.202. At 1115 hrs eight Spitfires from No. 126 Sqn, six from No 249 Sqn and four from No. 603 Sqn were scrambled to meet a raid comprising six Ju 88s escorted by of one Staffel of Bf 109s (from I./JG 77) and a small number of C.202s from 378a Squadriglia, 155° Gruppo. All three Spitfire squadrons would duly make claims against the Axis aircraft, with Beurling shooting down both a Bf 109 and a C.202. The latter aircraft was almost certainly flown by Sergente Maggiore Francesco Visentini. Diving into a formation of Folgores, Beurling (flying Spitfire VC BR323/S) singled one out and attacked it. ‘The “Eyetie” went into a steep dive, pulled out and twisted away, rolled and pulled into a climb. Finally, he went into a loop at the end of this climb, and I nabbed him just at its top. A two-second burst blew his cockpit apart. The pilot bailed out in a hell of a hurry’. Visentini was subsequently rescued from the sea some three hours later by a Cant Z.506B floatplane, having suffered wounds to his arms and legs. His demise raised Beurling’s Malta tally to six victories in just four days. (Artwork by Gareth Hector)

C.202 Folgore cover art 2 July 1942 would prove to be a costly day for both sides in involved in the fighting over Malta. Axis bombing raids began at 0815 hrs, and they would continue for the next 24 hours. The combined assault involved bombers from both the Luftwaffe and Regia Aeronautica, which were escorted by Bf 109Fs, Reggiane Re.2001s and C.202s. The final daylight raid occurred between 1945 hrs and 2020 hrs when three Savoia-Marchetti S.84bis bombers, with a close escort of ten C.202s led by Capitano Doglio Niclot of 151a Squadriglia, approached the island. Seven Spitfires of No. 249 Sqn, which had already been scrambled, were joined by four more from No. 185 Sqn in pursuit of the enemy formation. In the combat that followed the British pilots claimed two C.202s shot down and three damaged. The Italians, however, would exact a toll of their own. During a head-on attack on a C.202 that was almost certainly flown by Capitano Niclot, the No. 249 Sqn Spitfire VC (BR377/T-K) of Sgt C. S. G. De Nancrede was damaged to such a degree that the pilot was forced to crash land at Takali airfield. Upon returning to his base at Gela, on Sicily, Capitano Niclot claimed one Spitfire shot down as his first victory over Malta. Niclot would become the leading Italian ace of the Malta campaign, with six and three shared kills, prior to his death in combat on 27 July 1942, when he fell victim to Sgt George Beurling. (Artwork by Gareth Hector)