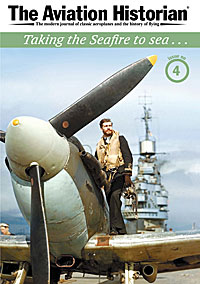 For those who believe the death of the magazine is upon us I would like to turn your gaze to The Aviation Historian.   In today’s climate of declining book and magazine sales the idea of a new publication hitting the stands seems a little well, dicey.  Published by the team of Nick Stroud and Mick Oakey, this NEW magazine is a shining example of what happens when passion, drive, experience and a desire to produce a quality product come together.  The Aviation Historian is not just another aviation magazine.  Nick and Mick have put their focus on the thousands of untold and lesser known aviation stories that have yet to be told.  Issue No 4 is chalk full of articles detailing everything from nuclear propulsion for aircraft to United Nation air ops in Lebanon in the 1958.  I found Mick Oakey’s article ‘History or Hogwash’ particularly interesting.  Once again claims that experimenter Gustave Whitehead flew before the Wright Brothers re-emerged in March 2013.  Mick Oakey points out without a doubt, the evidence is sketchy at best and of course what the Wright brother did, that nobody else thought to do, was take a picture of their first flight.

The Aviation Historian is published four times a year.