The Seafire took the reputation of its land-based forebear, the Spitfire, to sea as an interceptor par excellence. Such a specialized role was unique to the Royal Navy; the American and Japanese navies expected more range and versatility from their carrier fighters. After a resurgent British fleet returned to the Pacific in 1945, however, and kamikazes rained destruction on its carriers, the Seafire came into its own. When Reginald Mitchell first designed the Spitfire he never expected it to be used as a naval fighter. Even a cursory look at it reveals why. Its narrow-track undercarriage was short and weak compared with those of most purpose-built shipboard fighters; the view forward from the cockpit was extremely poor and its small size did not allow for an increase in internal fuel to extend range. Consequently, much of what the new Seafire was expected to do was beyond its capabilities, especially at the outset. But later, in the hands of a cadre of well trained pilots, it outshone other carrier fighters in an interceptor role more suited to its design. At the war’s outset the Fleet Air Arm (FAA) was in a sorry state. Of its 232 operational aircraft, some 140 were archaic Fairey Swordfish biplane torpedo bombers (which would chalk up an impressive combat record).

Lack of a modern fighter 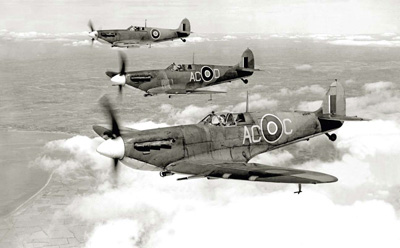 The only relatively modern aircraft the FAA possessed were 30 Blackburn Skua monoplanes (see Database, December 2007 Aeroplane), but, with a top speed of about 225 m.p.h. it was no match for more advanced fighters such as Japan’s Mitsubishi A6M2 Zero and Germany’s Messerschmitt Bf 109E (see Database, July 2010 Aeroplane). After the Spitfire proved itself during the Battle of Britain the Admiralty demanded a navalised version. As early as November 1939 a Royal Navy pilot had test-flown a Spitfire to assess its suitability for naval operations. That relatively casual experiment turned serious in the autumn of 1941 when the Admiralty received the go-ahead to procure “Sea Spitfires”. It requested 400 aircraft, but the Air Ministry offered only 250.

During Christmas week of 1941 Lt-Cdr H.P. Bramwell piloted a Spitfire M k VB equipped with an arrester hook and slinging lugs, conducting initial deck suitability trials aboard HMS Illustrious. During the tests he made 12 deck landings, took off seven times and was launched by catapult four times. These tests provided little insight into the problems that would dog the Seafire under less-favourable conditions. Flying from and landing on a ship is an extremely difficult exercise, and carrier operations are notoriously bad for aeroplanes. During the Second World War more carrier aircraft were lost owing to accidents, poor navigation and fuel starvation than to enemy action. Add the high-performance Seafire to the mix and the results were somewhat predictable. The first Seafires, as the type was re-designated, to be delivered were 48 Spitfire VBs modified for shipboard use. Most were assigned to the Air Service Training program at Hamble. The conversion of the Spitfire VB into the Seafire IB and the VC into the Seafire IIC was fairly simple. A 6ft-long hydraulically damped arrester hook, catapult spools and reinforced slinging lugs on each side of the fuselage were installed and naval avionics were added. But while the Seafire IB had been a straight conversion of the VB airframe, the Seafire Mks F.IIC and FR.IIC that followed were built as naval fighters from the ground up. The Mk III was the first Seafire with manually folded wings and a Rolls-Royce Merlin 55 engine. The Seafire made its combat debut during Operation Torch, the invasion of North Africa, beginning on November 8, 1942. Five Seafire squadrons participated, destroying five Vichy French aircraft, damaging three others and destroying another four on the ground. It was a mediocre start, and following events sealed the Seafire’s fate.

The carrier operations surrounding the amphibious assault on Salerno, Italy, served to define the Seafire’s reputation. After the invasion and capture of Sicily in August 1943 the Allies had quickly established a beachhead at Calabria on the “toe” of Italy on September 3. Hoping to avoid a prolonged fight up the narrow peninsula, the US Fifth Army launched Operation Avalanche, an amphibious assault in the Bay of Salerno, on September 9. Seven carriers (five of which were escort carriers) with a total of 121 Seafires were tasked with low- and medium-level air defense of the northern beachhead until the airfield at Montecorvino could be put into operation on the second day. On the first day the Luftwaffe reacted swiftly and vigorously. At first light six Junkers Ju 88s were intercepted and forced to drop their bombs and turn away. The second day was the Seafires’ most successful day of operation. More than 40 enemy aircraft were forced to turn back, but deck landing accidents began to take a heavy toll. At dawn on the third day only 39 Seafires were available for operations. Still, they managed to fly 160 sorties, an amazing utilization of aircraft. While the landings at Salerno were ultimately successful, they saddled the Seafire with an unenviable reputation.Statistically, the numbers painted a grim picture. Although only two Seafires were lost in combat, just two enemy aircraft had been shot down and 42 Seafires had been written off owing to accidents. The major reasons for the Seafire’s high attrition rate were poor operating conditions and pilot inexperience. Many of the pilots had transferred from the fleet carrier Indomitable to an escort carrier, and they now had to deal with a flight deck that was 30 per cent smaller on a ship that was 10kt slower. Although they shot down few enemy aircraft, the Seafires did achieve their ultimate objective: they protected the fleet.

How did the Seafire stack up against its carrier-borne contemporaries? Second World War naval fighters had to perform a variety of tasks. Interception was their primary role, but other duties included long-range escort, ground attack, reconnaissance, fighter sweeps, dive-bombing and spotting for bombardment by surface ships. To fulfill these roles the carrier fighter needs three attributes:

Only two Second World War-era naval fighters possessed all three virtues at the time of their introduction; the A6M2 Zero and Grumman F6F Hellcat. From October 1942 until August 1943 the Seafire held the crown as the fastest carrier fighter afloat, being eclipsed only by the introduction of the A6M5 and F6F-3. While its low- to medium level performance was respectable, the Seafire’s rate of climb and acceleration were remarkable. The F.III climbed at 3,250ft/ min up to 10,000ft, some 1,250ft/ min better than the Hellcat or Vought F4U Corsair, and 750ft/min better than the Bf 109G, Focke-Wulf Fw 190A or A6M5. For sheer acceleration the Seafire had no peer. In 1945 it was still the fastest and steepest-climbing Allied naval interceptor. That turned out to be of great tactical value, because once targets had been identified on radar the Seafire required less distance and time to reach any given altitude. The Seafire’s armament of two 20mm Hispano cannon and four 0•303in Browning machine-guns remained unchanged throughout the war, proving lethal against lightly-built Japanese aircrafThe deck-landing and handling qualities of the Seafire were, to put it kindly, not good. As a land-based interceptor its landing technique called for long runways and a comparatively fast approach speed down a 2° glide path, followed by a last second flare. Carrier deck landings required a totally different technique, ill-suited to the finely balanced Seafire.

While the faults of the Seafire as a carrier aircraft were many, its performance as a low-/medium level interceptor was superb. In the Pacific the Seafire encountered a new and formidable foe in the kamikaze. It was fortuitously equipped to meet this threat. When the British Pacific Fleet first encountered the kamikaze in 1945 the Japanese had developed their tactics with the “zero-feet” approach with a twist. The vast majority of kamikaze pilots were inexperienced, requiring an escort to guide them to their targets. When some 20 miles from the Allied fleet the more experienced escort pilots would pull up, exposing themselves to radar. It was hoped that this tactic would bait the high-flying Hellcats and Corsairs, leaving the low-level intruders unmolested. To counter this the British adopted the American-devised Jack patrol. It was a last-ditch method designed to catch kamikazes coming in at sea level, and the best aircraft for this role was the Seafire LF.III. Each Jack combat air patrol (CAP) consisted of eight Seafires equipped with 90gal slipper tanks. Held at less than 3,000ft and within ten miles of the destroyer screen, this was the last interceptor barrier before the fleet anti-aircraft guns would be called into action. Even with this well coordinated defensive system British carriers were hit several times, but they were never put out of action. The first two kamikaze Zeros shot down went to Sub-Lt R.H. Reynolds on April 1, 1945, during Operation Iceberg, the invasion of Okinawa. Seafires accounted for eight Zero kamikazes shot down and one damaged. They also shot down one Aichi D3A Val and claimed one Kawasaki Ki-61 Tony possibly damaged. The numbers may seem small when compared with US Navy claims, but without the Seafire the damage would have been far worse. In the closing weeks of the war the Seafire eventually proved itself a capable carrier aircraft. When properly equipped and operated by well-trained pilots and maintenance personnel, it finally gained respectability undreamed of when it first appeared on a carrier deck. At the war’s end 12 Seafire squadrons were in front-line carrier service. During air combat operations they destroyed 37 enemy aircraft (including 15 Zeros), probably destroyed another two and damaged 25, for the loss of eight Seafires in air-to-air combat.

Fittingly, the Seafire participated in the last dogfight of the war. On August 15, 1945, eight Seafires from Nos 887 and 894 Sqns encountered four Mitsubishi J2M3 Raidens and eight Zeros over Tokyo Bay. In the ensuing battle seven Zeros were shot down for the loss of one Seafire. In the last operations of the war the success of the two Seafire wings (88 aircraft) aboard the carriers Indefatigable and Implacable came as a surprise to all but the pilots themselves. Striking targets on the Japanese Home Islands between July 17 and August 15, 1945, the Seafires of Nos 801, 880, 887 and 894 Sqns amassed an impressive record: 1,186 sorties flown, comprising 705 CAPs, 324 fighter sweeps and 157 anti-shipping sorties. A total of 87 enemy aircraft were destroyed on the ground, and 11 in the air. The toll on enemy shipping was extensive: 3,700tons sunk, 1,615 tons probably sunk and 24,700 tons damaged. Although it was adapted from a land-based interceptor and was not well-suited to carrier use, the Seafire served admirably, and any criticism of its performance should be viewed through that prism. In many ways what the Seafire achieved was quite remarkable. Credit for its success should go to those who operated this fine fighter under trying and arduous conditions.

You can also read the entire PDF article as it appears in AEROPLANE, August 2010