With brakes on and hands on the throttle the pilots slowly increase the RPMs.  The radios crackle as clearance for take-off is given and slowly the first fighter begins to roll.  The dam is broken.  As the first aircraft bites into the wind and rises from the ground the second aircraft is close behind, and just as the first aircraft takes to the air there are four more roaring down the field in hot pursuit.  The sight is inspiring, the sound unforgettable and in just over a minute all aircraft are airborne.  This is the beginning of the grand finale and the end to a great day of amazing flying.

Every summer in July the Flying Legends Air Show tears up the sky above Duxford.  Described as ‘the worlds’ greatest air show’ it’s two days of pure aeronautical magic.  Not just an air show, Flying Legends is aviation theatre of the highest level.  The stars of the show are the sleek and powerful World War II piston engine fighters.  Built for speed and menacing in character, these swift creatures come in all shapes, sizes and colours.  The elegant and graceful Spitfire looks almost fragile sitting beside the muscle bound and pugnacious Hawker Sea Fury.  The fabric covered Gloster Gladiator bi-plane fighter seems quaint compared to the brutish Fw 190.  In the air these aircraft are transformed.  To say that the flying display is impressive is an understatement.  The choreography is sublime with a hypnotic quality that captures your senses and holds them all afternoon.  The flight line is set up so that all the aircraft are pointed towards the crowd with a taxiway directly in front.  In order to reach the end of the runway for take-off the aircraft must taxi in front of the crowd, giving everyone the opportunity for great photographs and all engine starts are there for all to see. 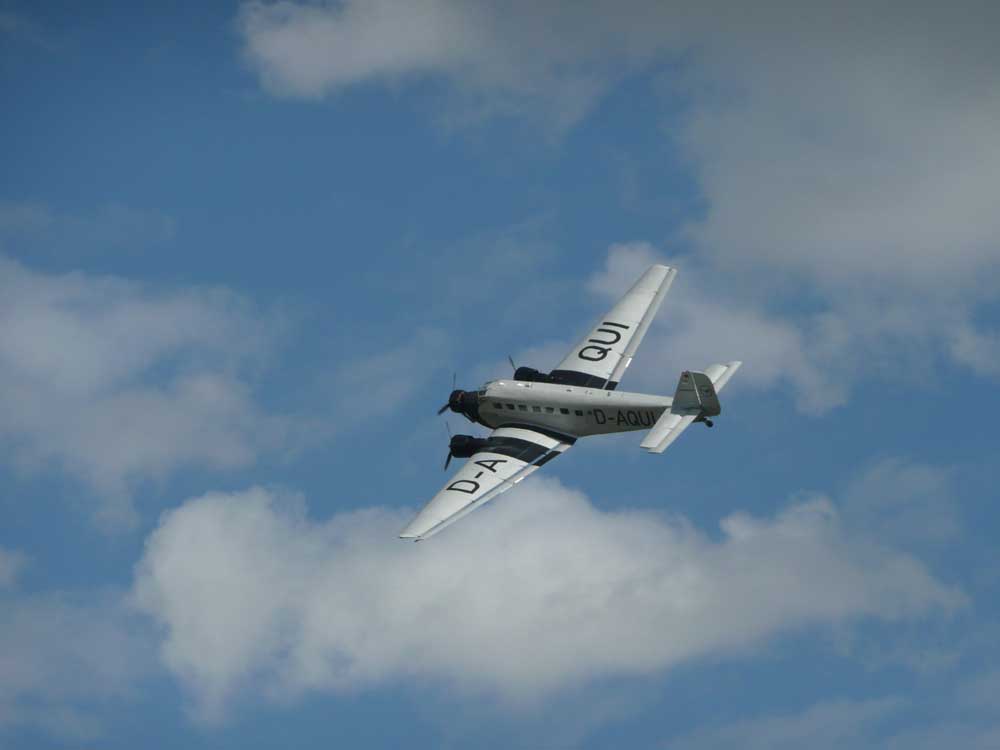 Sadly, the 2009 show was a little different from those of the past.  While there were some unbelievable sights at last year’s show there was one that was rather less than exciting.  The Fighter Collection’s hanger full of war birds was unceremoniously grounded by the Civil Aviation Authority.  According the TFC’s boss, Stephen Grey, the CCA decided to re-examine all the technical paperwork related to the fleet prior to the show.  The timing couldn’t have been worse and a good chunk of the war bird line up (P-40C, P-36, P-39, F4F, F6F, F4U were not allowed to fly).  While a body blow to most air shows, Flying Legends 2009 was still a magnificent event and one of the best you will ever see.

Legends is well known for its multiple-aircraft routines and this year’s show would once again ‘raise the bar.’  The opening act was sheer spectacle as seven Spitfires mixed it up with a Bf 109 Bouchon and Fw 190.  Two aircraft not seen together for decades and one of the greatest moments in Flying Legends history.  Christophe Jacquard’s Flug-Werk Fw 190A-8/N replica was the show’s biggest draw and the first time an Fw 190 has flown on English soil since the Second World War.  The Spitfire tail chase sequence was highlighted by dramatic low and close passes by the Fw 190 and Bf 109.  It’s an impressive display of flying that sets the tone for the next three hours.  It’s piston engine heaven. 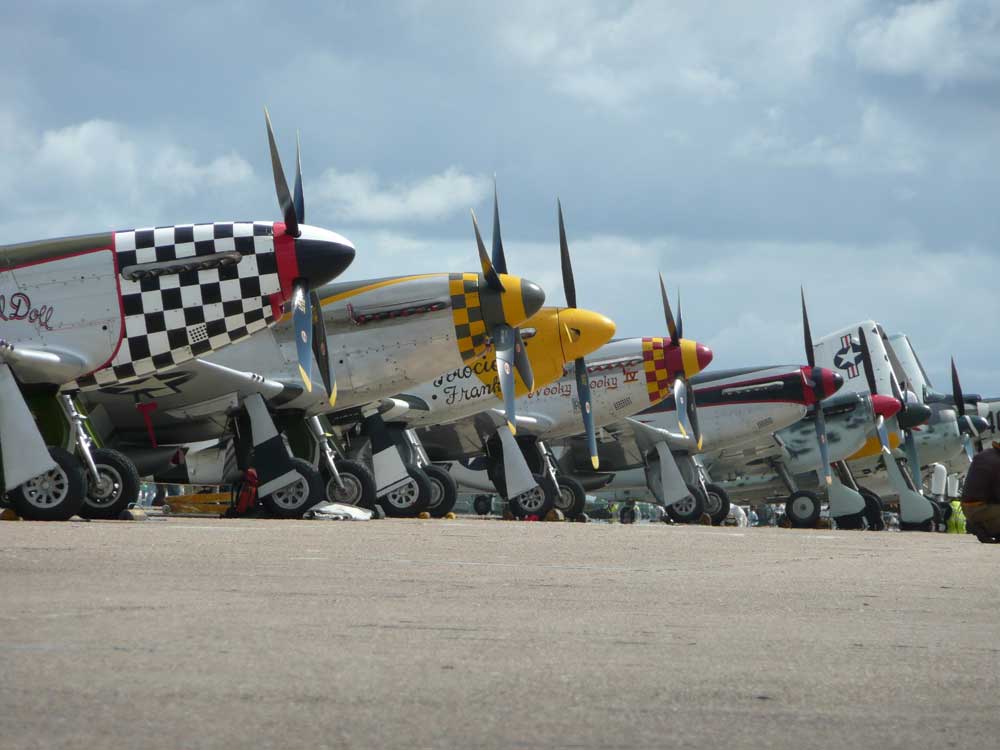 And just when you thought you couldn’t get enough speed the show abruptly changes gear as a Junkers Ju 52 transport, Me 108 and aerobatic Jungman take to the sky.  The three engine slab sided Ju 52, designed in the thirties, seems to float across the field rather than fly like a giant moth looking for a place to land.  While the Ju 52 flies lazy figure eights, the Me 108 and Jungman provide a quick turning, feisty contrast to the slow moving 52.  Special guests from the USA took centre stage with an impressive display as the Horsemen flew their three Mustang close formation presentation.  This was followed by a trio of B-25 Mitchells and threesome of Yak fighters.  In a most spirited sequence a solo Yak-9 flew a solo display while a Yak-9 and Yak-3 made fast photographic passes for the crowd.  World War I was represented by three Fokker DrIs and Nieuport 17 in a tight turning dogfight display.  And not to be outdone the Shuttleworth Collection made an appearance with their beautifully restored Lysander and Gloster Gladiator.

It’s an afternoon filled with aerobatic perfection.  If there isn’t an aircraft flying in front of you there were several landing, or taking off, usually at the same time.  A constant flow of pure flying theatre and the grand finale is worth the trip alone.  After several hours of loops, rolls, wingovers, high speed low level passes precision formation aerobatics and incredible sounds the final act is a huge formation flyby of 22 aircraft.  After a carefully choreographed mass take-off the aircraft form up into formation far from the airfield.  While we wait, Stephen Grey, owner of the Fighter Collection and co-sponsor of the Flying Legends, keeps us entertained with a brilliant aerobatic performance in his 2,000 horsepower Hawker Sea Fury.  Then from stage left the formation gets larger and larger, and just ahead of the formation, Stephen makes his last high speed dive and pass in front of the audience.  The formation is composed of four aircraft sections with the lead four set the highest with the other sections following in a stepped down arrangement.  The sound is a thunderous chorous of piston engine delight and this is the only place on earth that you will hear such an airborne symphony.  This is followed by a second pass as each individual four aircraft section separates from the main formation.  And just when you think it’s all over the four aircraft sections return for a low-level pass and break for landing. As the last fighter touches down and the last engines are shut down one can only marvel at just what has occurred. The best part is – it’s a two-day show!

From an engineering and aviation design perspective, Flying Legends represents a period of aviation spanning ten years of incredible aviation history (1935-1945).  Two book ends that represent the beginning and end of two eras.  The first is the end of the bi-plane era, represented by the Gloster Gladiator fighter and the beginning of the monoplane era as shown by the P-40, Hurricane and Spitfire and ending with the Centauraus powered Sea Fury and Griffon engine Spitfire – two fighters at the pinnacle of piston engine technology.  The backdrop for all this history is Duxford airfield, home of the Imperial War Museum’s aircraft collection.  Duxford also has an illustrious history – built during the First World War, it was later home to No 19 Squadron RAF – the first squadron to be equipped with the Spitfire.  The airfield saw action during the Battle of Britain and was home to the Cold War’s first jet fighters the Gloster Meteor.  Today Duxford has some of the rarest aircraft in the world on display.

For Canadians with an interest in aviation history this is a must show.  Most of the aircraft on display were flown by RCAF aircrew and serviced by ground crews during the Second World War.  It’s your chance to experience the sights, sounds and smells of what it must have like to fly from an operational bomber or fighter base during World War II.  Flying Legends has been described as the best war bird air show in the world and it is, but what makes it extraordinary is the living history that takes to the skies every July.  If there’s such thing as a time machine it’s here at Duxford.

If you’re planning a trip to Flying Legends book early.  Surrounding accommodations are booked a year in advance.  Your best bet is to stay in Cambridge, which is only ten miles north of Duxford.  You can get to the airfield during the weekend show by taking the free bus shuttle service that leaves from the Cambridge train station, or you can stay and London and catch the many trains to Cambridge.  Tickets for the show are around 30 pounds, but that includes entrance to the Imperial War Museums aviation collection, US Air Force Air Power Museum and Land Warfair Hall.